Yay I am famous!

“What’s killing our pollinators is killing us too, and I’m absolutely delighted to see this go forward,” said James McDonald, owner of the Encinitas Bee Co.

McDonald, who helped lead the successful campaign earlier this year to eliminate the city’s use of bee-killing, neonicotiniod insecticides, said that banning the use of glyphosate-based products would stop the build-up of toxins in honey and honeycomb, and protect baby bees.

Blakespear mentioned that Glen Park became the city’s first “organic” park earlier this month and asked what will be different between Glen Park and the city’s other parks once the new glyphosate ban begins. 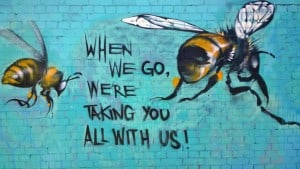