Why you should not heat honey 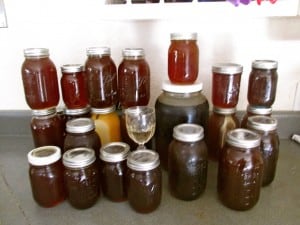 According to Ayurvedic dietary principles, honey should never be heated to above 40°C (104°F) as honey digests slowly when cooked and the molecules fuse to form a gluey structure. This adheres to mucous membranes, clogging the body’s channels and produces toxins or ‘ama’ (undigested matter) which is considered to be the root cause of ill health by Ayurveda. Ayurvedic texts caution that nothing is more troublesome and difficult to cleanse than ama caused by the improper intake of honey.

Ayurveda strongly recommended that Honey should not be heated, mixed with hot foods/drinks, consumed in hot climates or areas of extreme heat, or with spicy or fermented beverages. Honey includes nectar of various flowers of which some may be poisonous. When honey is mixed with hot and spicy foods the poisonous properties get enhanced and cause imbalance of doshas. The broad conclusion is that uncooked honey is nectar whereas cooked honey is poison. Most commercially available honey in stores and supermarkets has pre-heat treated, so stick to “raw” organic honey, to not only get the benefits but also to avoid the toxicity.

Several studies to test this theory have shown that when honey is heated it produces a chemical called hydroxymethyl furfuraldehyde (HMF), increases the level of peroxides, as well as altering the all-important ‘medicinal’ molecular structure of honey irrevocably, making it indigestible and toxic. Some sources say that HMF may also be toxic to humans so if you need something natural sweetener that needs to be heated in your recipes, try coconut palm sugar or jaggery.