flow hive, tricking people into thinking they can get honey without the work

There is a new invention designed to extract honey from the hive without bothering the bees. I am not a big fan of the idea, other than owning a really cool gadget. I would own one just for the novelty. But it does not cut down on work or help the bees.

here is a good video on the subject 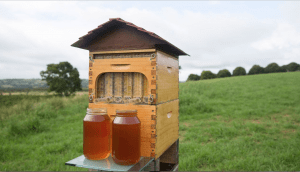 here is a good article on thee subject

Going Against The Flow: Is The Flow Hive a Good Idea?

It’s fab, it’s new, and the honey flows straight into the jar. It’s so easy. But then, powdered instant potato is easy, too. Does that make it a good idea?

Despite my mission to focus on positivistic messages of change, at Milkwood we’ve got a charter of calling a spade a spade.

And to call yet another plastic beehive addition which does not benefit the bees but only the beekeeper… what it is.

We’ve seen a lot (like, a LOT) of media about the Flow Hive ™ in this last week and after a few hundred questions about what we think of it, we thought we’d spell it out.

The basic innards of the Flow Hive™ system seem to be sets of plastic half-built comb, which face each other, and which the bees then finish off and connect up, fill with honey, and cap.

Then, with a drumroll, when the beekeeper is ready, they turn a key, the two plastic hive foundations crack apart, the honey flows out down a channel and out a spout, into the jars provided below.

Is it good for the backyard beekeeper looking for a trophy moment? Heck yeah. The effect of the honey drizzling out looks great, and has caught imaginations world-wide.

SAVE THE BEES. Because anything (like, anything) that has to do with bees, or that uses bees, is good for the bees. Right?

Actually, no. Not so much.

Bees want to build their own wax comb. It’s part of the bee superoganism. The wax is literally built from their bodies.

The comb is the bee’s home, their communication system (which doesn’t work nearly as well if it’s made from plastic rather than bee-drawn wax, as discussed in Tautz), and functions as a central organ.

The comb is the bee’s womb – it’s where they raise their brood.

And given a choice, bees do not want a pre-built plastic womb, home or larder, any more than we would.

It’s the birthright of bees to build comb.

Natural wax comb, 100% bee-built, in a warré hive – the bees set their own cell size according to the season and the colony’s particular needs.

But that’s not all.

The other concern we have with this device is that it encourages + celebrates beekeeper-centric beekeeping, and infers that bee stewardship is totally easy. It’s all about the punchline.

Is it good for the bees? Who cares. We’ve got flowing honey.

Actually, this conversation is not just about the Flow Hive.

What we’re really talking about here is the wider, industrialised profit-driven approach to beekeeping (as exemplified by the langstroth hive design), which places production above ethics + long-term bee health.

We now understand that just the laying of an egg is not actually an indicator of a chicken’s happiness, health or ethical treatment, nor is it an indication of the quality of the egg.

We just know that, unless they’re dead, hens tend to lay eggs.

They may not be healthy eggs, or healthy chickens, but we’ve got our eggs. So we’re all good, right?

Despite the fact that these eggs are produced in a deeply unsanitary, un-ethical production line where the animals in question can barely stay alive, to the point where they need regular chemical treatments to ensure they don’t turn up their toes completely.

On the other hand, in a happy pastured chicken setup, the chickens have what they need – light, air, worms, grass, company – a warm bed, and room to explore. Both the chickens, and the nutritional density of the eggs, are the better for it.

We all understand this difference, and the fact that healthy chickens means healthy egg eaters, and healthy farms and ecosystems.

Now take that analogy across to bees.

Do bees want plastic foundations, plastic organs, queen excluders, their combs cracked open down the middle, regularly, while still in the hive, and all the rest? No, no they very most likely don’t.

Bees prefer natural wax comb that they draw themselves and renew when they see fit; to have the queen roam the hive and lay as that colony requires for long-term resilience; and for their hive to be sited in a permanent, sheltered setting.

The main push-back against natural beekeeping is the idea that anything that is bee-focussed is not as productive for the beekeeper, honey-wise.