Well here is a deceiving article , and reveals how the media can trick you into believing something completely false by telling the truth. It is like when the chemical companies tell you their chemicals are not killing off the bee, They are telling the truth, Their chemicals only weaken the bee so that something else can kill them. This is how the ” mystery of the dying bee ” thing was maintained for so many years. They kept pointing the finger at the various pathogens that were killing the bee, And were telling the truth the whole time. But of course the bee could have fought off these diseases and parasites if they were not under a constant onslaught of harsh chemicals. In the case of this article. They put up a completely false headline, and than hide the truth in the fine print. The truth is, Bees are dying off in record numbers, but the bee industry is replacing the bees just as fast. The Beepocalypse is not near over. We have something that resembles a 75% die off here in San Diego.   Another good example of this phenomena is chickens, They are dying off at a record number. But farmers keep breeding new ones. So the number stays the same or grows. If you really want to know what is happening with the chicken, go look at the price of eggs at the supermarket.   In the case of the bee, go look at the price of almonds, The price has gone through the roof because the damage is passed on to the consumer.   It is not the bee that is at risk of dying off, it is the beekeeper. Because beekeepers can’t afford to replace their bees at this rate for much longer. 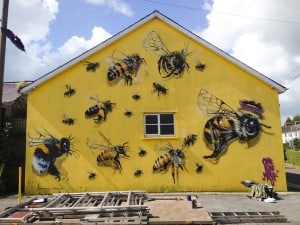